The below post reminded my of something I bookmarked a while ago with the intention of sharing, the first 2 tracks from the audio version of McLuhan's book 'The Medium Is The Massage'.

For those who aren't familiar with the book, it's a seminal visual treatise on how media delivery affects meaning and blah blah.... I'm sure you've seen a copy carefully placed on someone's coffee table somewhere - have a flick though, it's well worth a look.
To the point... not long after the book came out, an LP was made. It twists the original text through effects,  strange voices and all sorts of other dissonance. It's very much a recording of it's time (in that I can't imagine many prominent cultural theorists making avante-garde albums today), and it's a fascinating listen - especially if you know the material.
It's become a seminal cut-up record in it's own right, being checked as an influence by several hip-hop, experimental and electronica acts over the years.....  I could witter about it for a while longer, but you should have a listen: 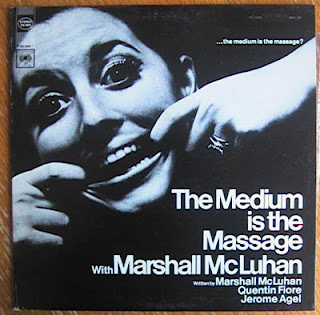 Unfortunately the LP commands fairly high prices now and the CD reissue from '99 is long out of print, but there is another CD reissue in the works apparently, due for release next year.
by T at 22:58